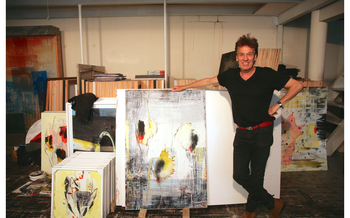 Tony Soulié has been a recognized artist of the New French Abstraction since the 1970s. In his work, he uses painting, Land Art, photography and written inscriptions. Theatre, acrobatics and dance, Tony Soulié is interested in all arts and experiences. He manages to combine his work as a painter with his taste for travel in open and extreme lands such as deserts, shores, volcanoes, dense forests. Hundreds of exhibitions of his works have been organized around the world and they are in numerous public and private collections such as the Musée d'art moderne de la ville de Paris or the Hawaii Arts and Culture Foundation.

"After receiving the Villa Medici Hors les murs prize in 1977, I was able to move to Naples, where I made my first Land Art installations on Vesuvius, Etna or Stromboli. Volcanoes have since been a major source of inspiration for me, but have been joined by a myriad of other inspirations, largely from my travels. The African coasts, Venice and especially Murano, Arizona, New York, Hawaii... In each of these places I found fascinating themes such as skyscrapers, bullfighting or glass work, which I was able to photograph, paint, rethink, and connect with." The use of carborundum in his painting is also directly related to his installations on volcanoes: the silicon compound is only found in its pure state in nature in volcanic exhalations. The technique of painted photography, or "photo-painting", is based on large-format black and white prints of the photographs taken during his many travels around the world. The print is reworked on the ground. Using different materials, canvas, metal, paint, silkscreen, varnish, these superimposed layers give a set of patinas, mats and glosses, while preserving the reality of nature.

His art allows him to create connections in a world where infinity meets the finite, where everything is a cycle, everything is a new beginning and where horizons multiply to give us more and more to see, discover and understand. "So if, seeing my paintings, one is transported to worlds that are both known and mysterious - whether they be sprawling megacities, dizzying mountains, or flowers containing the origin of the world - my work will have borne fruit."

See all the works of Tony Soulié