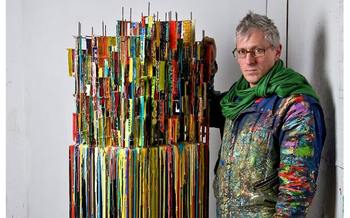 In a career spanning 25 years, through his travels and numerous experiments, British artist and former graphic designer Russel West has acquired a unique technique for creating his three-dimensional murals. These are composed of a multitude of media and supports, where colours, juxtapositions and forms combine for a lively and dynamic result. A discreet artist living in his studio on the Isle of Wight, Russel West has enjoyed dazzling success through his exhibitions all over the world, particularly in Asia, a continent that has had a considerable influence on his work.

"I've always liked accumulations and patterns that don't repeat themselves, and that's probably why I find slums so fascinating. It's not so much the cities that inspire me, but the parts of the cities that are the most overcrowded. I travelled a lot in the 80s and 90s, mainly in Asia and the Orient. It was probably in the slums of India that I found my love for extreme colour combinations, but those in China interested me more because they are built high up, like the infamous "Citadel of Kowloon". I had the chance to visit it on the first day I went to Hong Kong in 1991, before it was demolished by the Chinese authorities to clean up the city, and I discovered a very well guarded fence surrounding it, the authorities not letting anyone in. It had to be demolished within six months, no one knew how many people were living or working there, but it was estimated that 50,000 people had been evicted. I was able to make sketches and take many pictures of the outside and I was present when they demolished the walled city with a ball and chain, allowing me to see what the inside looked like."

Russel West uses a very large number of different mediums, and all sorts of more or less traditional tools. His technique is unique: he does not use brushes, just two pieces of wire hanger and a sharp knife. He also uses paint drips because he appreciates the randomness of the paint movements, an echo of the way slums are formed. "I set out to create a kind of music for the eyes. If people engage with my work, then I guess my mission is accomplished. I think there's a lot to learn from studying slums. They are built by the people who live there, not by urban planners or developers, who generally prefer straight lines and conformity. That is why each dwelling is different, reflecting the situation or the tastes of the inhabitants. In an increasingly sanitized world, where the intervention of machines prevents natural chaos, I hope to leave a testimony of these emblematic places."

See all the works of Russel West