about the artist :
Jan Kaláb

Jan Kaláb is a Czech artist who began his career in graffiti in the early 1990s, after the fall of the Soviet Union. Born in 1978, his adolescence was marked by this historical turning point and he was seized by the development of an urban art reclaiming public space. His style quickly stood out, and he managed to make a name for himself in Europe under the pseudonyms of Cake and Point. He is also the founder of the legendary DSK CREW.

Never short of ideas and constantly seeking to push the limits of his art, Jan bypasses the classic codes of urban art and aerosol painting to introduce sculpture into his works and create three-dimensional graffiti on wood or polystyrene. His art is part of the Post-Graffiti movement, a critical and political movement that finds new ways of understanding the street, public space and the artistic supports it reveals. Space becomes accessible, tools are reinvented.

After his success in the world of Street Art, Jan Kaláb obtained a master's degree from the Academy of Fine Arts in Prague in 2006. From then on, canvas replaced concrete and he developed a deep attraction for abstraction and kinetic art, combining painting and sculpture in infinite variations around the themes of time and movement. His works invite the viewers to question their own relationship to colour, depth and their perception of the world, through geometric forms inspired by neoplasticism and the De Stijl movement.

In 2010, he received the ART PRAGUE Young Award and since then Jan Kaláb's works have been presented in the largest European cities, through solo exhibitions and various groups. He’s also the co-creator of a highly dynamic cultural space in Prague, called Trafacka. More than 160 exhibitions took place there from the opening in 2006 till the closure in 2015. On his own or collectively, the motto is the same: always getting higher, always inventing new forms – a tribute to the soul of graffiti. 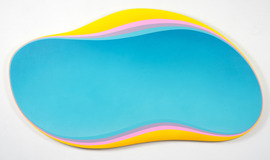